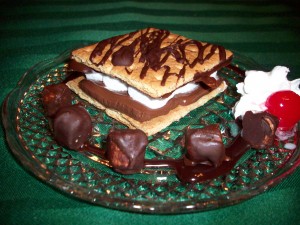 Need a quick & easy dessert?  Here’s a new twist on an age-old recipe for S’mores.

I remember making S’mores in Girl Scouts when I was growing up, and Girl Scouts are actually credited with the first written S’mores recipe in their 1927 Girl Scout Handbook.  (I wasn’t born for decades later, just in case you’re wondering.)

*To make chocolate covered marshmallows, place marshmallow on a toothpick and dip in melted chocolate.  Place on waxed paper to cool.