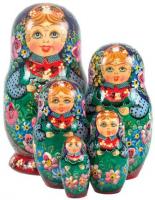 When I was growing up, I thought Russian nesting dolls were fascinating, and I still think they are intriguing.  They are also called Matryoshka dolls, with the literal meaning of “Matryoshka” being “little matron.”  Sets consist of a wooden figure which has a smaller figure nested inside of it, and that figure has an even smaller figure inside of it, and so on.  The traditional number of figures in a set is usually five, and the innermost doll is sometimes a baby.  The dolls often follow a certain theme which can be  Christmas or holiday dolls.

I think it’s interesting that the very first nesting doll set was carved in Russia in 1890.  These dolls have been popular for over one hundred and twenty years.  Maybe it’s the element of surprise that makes them fascinating by opening up each doll to see what is nested inside of it.